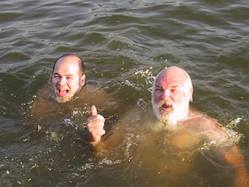 Cypress has been in my family since 1986. Once a dream of my late Father's to own a piece of his childhood. He grew up opposite of Cypress on Petite Lake, paddling across midnight waters to join in on the hot Summer nights. All I can picture is that scene in "Dirty Dancing" when all the staff feverishly dance after hours, the lighting was perfect and you knew you weren't supposed to be there. Realistically though, It was probably a bunch of kids sharing a bonfire on the beach, occasionally sneaking a beer. Whatever the scenario, it was his "coming of age" tale and it drew him back to this sandy, cottage lined resort.

( My oldest Brother and Dad, Tony)

After my Dad's passing, the property fell silent and a sort of sadness lingered. My Mother needed to move on and shut down the property.  Though, never ran as a business, it was a haven for all who called themselves friend. You see, the "Oh, Tony!" antics and his bellowing voice made people flock to be apart of his one man party. To this day, my ears are honored to hear people's memories of "Remember that time when Tony.....". I still feel the love he so easily gave to others. The Cypress chapter felt closed, painful to walk the grounds and seemingly too big a legacy to fill.  And so, the trees and grass swallowed her up and the buildings peeled and weathered.
It wasn't until the Summer of 2011, I was 27, when I finally got up the courage to really take a walk around Cypress in all it's glory.....I mean horror. (See pics below) I found myself ripping out weeds, peeking in windows, wiping away dirt and listing projects in my mind. I knew that day that I would regret turning my back on her. It seemed an impossible task at the time and I could not even fathom broaching the subject. The whole time I was afraid it was too emotional a subject for my Mother. How foolish I was. I was met with logical and adventurous encouragement. It was my Mother who taught me and my three older brothers the pride of hard work and doing the best you can. Not once, was I ever told I couldn't achieve something because I was female. To this day, she works endlessly on her farm. Never stopping, until it is just so.
Five years in, I sit in awe of how much has been done and how much there is to be done. More than anything, I am in debt to every one's encouraging words and continued patronage. Cypress was really made to facilitate memories of friends who have yet to meet and families that will never outgrow her charm.
Amanda Urban, President of Cypress Resort & Marine,Inc